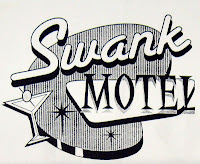 Swank Motel was the Cleveland, Ohio "swing" cover band I played guitar for from 1993-98.  As our long-gone web page used to say:

"Swank Motel. has been called lounge, jazz, blues, rock, rockabilly, ska, heavy metal and a few other things as well. Swank Motel plays timeless music that spans virtually every decade of the 20th century. Everybody from Louis Jordan to AC/DC to Nirvana to Rosemary Clooney to Nat King Cole to the Circle Jerks. Swank Motel plays the sort of stuff workin' and drinkin' folks in Cleveland want to hear." 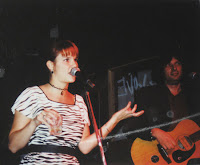 Vocalist and front man Darryl Whalen (Numbskull, Buddy Love Combo, many others) had the original idea for this band. Legend goes that he was trying to form a combo such as this as far back as the mid-1980's, but it wasn't until 1993 that he managed to convince someone (ME, on guitar) to actually do it. First came "Darryl & Tom's Screwed Up Acoustic Lounge Band." Next, the cool and talented singer Hadley Conner joined up. The finishing touches to the masterpiece known as Swank Motel was when funky bassist Benjamin Daniels showed up, and the groovin' and movin' Johnny P. (Lonesome Bones, Hemlocks) sat down behind the drum kit. Minutes later we were out entertaining club goers of all ages, from one side of town to the other. Along the way we also opened up for hep acts like NANCY SINATRA, SOUL COUGHING, and LYDIA LUNCH. How'd we do it? Check out the SWANK, below and find out: 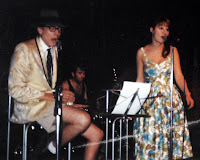 The year 1995 brought some major changes - Hadley and John bowed out and we welcomed aboard the multi-octave and wildly entertaining singer Jessica Skerry (Horvat), as well as Doug Turner and his fabulous drum kit...and so the SWANK continued, in a big-time way. This fantastic lineup is represented by the ever popular "Head Like A Hole," written by Mr. Trent Reznor himself. Naturally our version blows his out of the water. This track also features Kris Morron sliding that big 'ol trombone.

Not long after this was recorded, Darryl left the group. The remaining recordings feature myself, Jessica, Benjamin, Kris and either Doug or Ricky Exton on drums. Some recorded live, some recorded in the studio, ALL very swanky, as one would well imagine.... 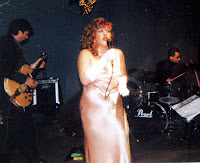 In the summer of 1998 I left the band to go on a long sabbatical out west. When I returned, I joined Darryl's Buddy Love Combo before moving out to Seattle. Swank Motel continued on for a while after I quit with a new guitar player named Danny White, before finally breaking up in 1999.   I went to see them play one time before I left town, and I can tell you it was still a (you guessed it) SWANKY good time. Today Jessica Skerry-Horvat plays in the band Lounge Kitty. If you like any of this music, then Tom Miller's Music Clog recommends you check out Lounge Kitty's web page and go see them play the next time you are Cleveland.
So that's it folks...and remember, whatever you do, DON'T go changing!! (unless it's for the better, of course) 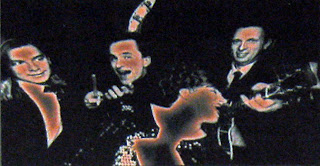 Posted by Tom and Denise Miller at 4:30 PM

I saw Swank Motel as a geeky HS kid back in the mid-90s. It was an opening gig for Dread Zeppelin, one of the most fun shows I think I've ever seen. Thanks for posting these!!!

Tom! What a pleasure to find you, your blog, and to hear these old tracks again. I hope life is treating you well.

"Burn the mutha down!"

Hi Kris! Good to hear from you! Hope you are doing well too. Still playing that trombone I presume? We had a lot of fun in this band, huh? You can still hear it in these recordings. Take care & thanks for checking out the blog! Tom

Hey Adam. Yep, that Dread Zeppelin show was a good one! Many thanks for checking out our blog. Enjoy the music! Tom & Denise

well i know before Dare-el moved, he got Tony Urso to play guitar for a few shows.

Tom and Denise Miller
Welcome! This is free download music site. In the 1980's and 1990's I (Tom) played in the Cleveland, Ohio bands The Offbeats, Starvation Army, Agitated, Children's Crusade, Swank Motel, Buddy Love Combo, Dumbshits and others. In 1999 I left Cleveland for Seattle, WA, where I lived for 5 years. From 2004-2012 I lived in Pittsburgh, PA with my wife Denise. In December 2012 we moved to Cleveland Heights, Ohio where we currently reside. I no longer play in bands, but still occasionally write and record songs, playing all the instruments myself. Some are posted on this blog; others no one has heard except myself.

Promote Your Page Too

Promote Your Page Too